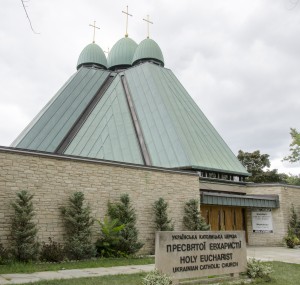 Holy Eucharist Ukrainian Catholic Church is located at 515 Broadview Avenue, East Toronto, at the corner of Broadview and Bain Avenues, south of the Danforth, north of Gerrard St. East.

The church sits atop the Don Valley and overlooks a beautiful park, the site of various community and sport activities in the summer, and tobogganing in the winter. It is clearly visible from the Don Valley Parkway below.
The immediate vicinity of the church is residential. Most homes in this area were build in the years 1900, 1905 and 1911.

Looking west, the view of the Toronto skyline is magnificent from the church, especially in the evening. Tourists will often come to this location to sit on the hill of the park, to admire the view, or to take pictures against the background of the city.

How do I get to the Church?

TAKING THE T.T.C. If you are travelling by Toronto Transit, take the subway to Broadview Station. At the station, take the 504 or 505 streetcar south and exit opposite the church. Instead of the streetcar, you may chose to walk from the station. It’s about a ten minute walk to the church.

BY CAR FROM THE WEST. Take the Gardiner Expressway east, then go north on the Don Valley Parkway and take the Bloor-Bayview exit. Travel across the Prince Edward Viaduct. At the first light, Broadview Avenue, turn right and go south. The church is on the east side.

BY CAR FROM THE EAST. Take the 401 highway and go south on the Don Valley Parkway. Take the Bloor-Bayview exit. Travel across the Prince Edward Viaduct. At the first light, Broadview Avenue, turn right and go south. The church is on the east side.

Architecturally, Holy Eucharist Church is an outstanding example of tradition and contemporary church design. It is a landmark in the city of Toronto.

Plans for the building complex were prepared by the architect, Radoslav Zuk. Construction began in 1965 and and completed in 1967.

The design of Holy Eucharist Church is square in form. The four important columns that support the central dome divide the interior space into the form of a Greek Cross, with bars of equal length intersecting in the centre.

The church also gives the impression of being a ship on it’s journey (an ark of salvation). Not only is this evident from the exterior, but also within the church at silent prayer, one gets the feeling of being on a ship, which is gently swaying from side to side as it continues on it’s way to the kingdom of God.

In accordance with tradition, Holy Eucharist Church is oriented so that the altar is facing east and sunrise.

The narthex or vestibule is the first part of the church; one enters this part through three doors.

There is a hierarchical plan in the way icons are to be arranged in the Church. The highest point, the dome, is reserved for our Lord. On the front wall (above the sanctuary) is the figure of Mary, the Mother of God. She is the link between the Creator and His Creation. Next, there are icons of the angels, apostles and saints on the iconostasis. These constitue

Matthew, Mark, Luke and John are depicted on the four main columns of the nave. They are pillars of the Christianity, because their writings have spread the Gospel of Jesus to the four ends of the earth.

These two candelabra remind us that we, too, have a promised land -- the kingdom of Heaven. Just as God guided the Jews to their promised land, so today He guides us to ours through the teachings of the Gospel and the grace of the sacraments.

The Iconostasis, or “Icon Screen,” separates the nave from the sanctuary. It is symbolic of the temple veil in the Old Testament, which separated the Holy Holies from the remainder of the Temple. On the screen are placed icons or religious pictures of Christ, Mary, and various other saints. All these invite the faithful to worship

The Royal Doors on the icon screen are called “ROYAL” in view of the fact that Christ the King is carried through them in the Mystery of the Holy Eucharist. They remind us that Christ alone is the door leading to communion with the Father: “No one comes to the Father, but through me” (John 14:6)

We always enjoy hearing from our patrons. If you have a question, a comment or a concern, please contact us by any of the following channels: